So, I have been woefully negligent concerning the blog for quite a while. Mistake it not for laziness! I’ve produced some new sculpture for a show at The Central Exchange in downtown Kansas City and am trying to put together a few things for our Open Studio Holiday Sale this Saturday at the Bonfills. So I have a ton of images to post. So I’ll start with The Central Exchange.

I’m currently showing drawing and sculpture there. The sculpture is a series of wall-hanging vases / vessels I made specifically with The Central Exchange in mind. I took one of the pieces from the Dreamscapes installation, modified the mold and made about 25 castings. Each was then handfinished and decorated using a variety of techniques. I call it Of One Form, the idea being they are all from the same mold, but each unique. I’ll show some process images here and each of the finished pieces in the next post.

I made a new mold that had the slant of the vase built in. With my earlier version, I had to hand slice the top off, which was time-consuming and each one I did was different. This new mold makes them all relatively the same. So, I clamp this puppy together, lean it on something and pour slip (that I’ve previously poured through a strainer) right it. 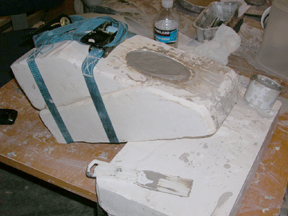 I let the slip set for about 15 minutes. Then I pour the exces slip back in the bucket. Easy, peasy, Japaneasy. 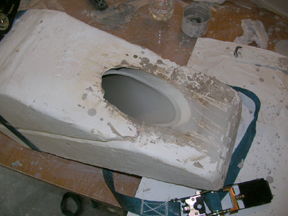 There is always some handfinishing involved. Defects from the mold, such as air bubbles, need to be removed as well as the mold seams. The rim also has to be cleaned up and leveled. Still, the cleanup is significantly easier than my previous version.

After hand finishing, some pieces get bisque fired and others not. It depends on what type of technique I use for surface decoration. For most pieces, I used underglazes, which are more like colored slip than glazes. They come in pencil, watercolor, and paintlike forms. For example, if I want to draw on the clay, it must be fired first, else the pencil just scratches the unfired clay. I can paint or spray underglazes on the clay whether it has been fired or not. A clear glaze then must be applied over all underglazes.

More in progress works. The little jars are underglazes. The clear glaze is the big pink bottle. It’s pink so you can tell where you’ve covered the piece and then it fires to a clear gloss.

I sprayed the clear glaze on in a little spray booth. There were also a few other glazes that I used and some of those I could spray on as well. 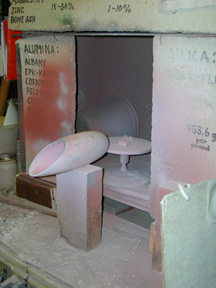 And here are the wall vases all lined up, ready for their last firing.

In the next post, I’ll show all the finished pieces.