Okay, so I haven’t posted in a while, so I’m doing a few in quick succession here. I’ve made my first few molds in the past week, which has been messy and mildly successful with one decent failure. The first chapter in this project was the building of the prototypes. The finished versions here…

So, here is the second chapter: The Making of the Molds
I’m starting out with a simple egg mold for making more podbabies.

Here is the first mold attempt. The green stuff is an oil-based clay that I pack in the bottom of the clamped “cottle board” assembly. Then I add the prototype, in this case, simply a wood egg and pack clay up to its midpoint. Pour the plaster, let it set, undo the assembly and this is the result. 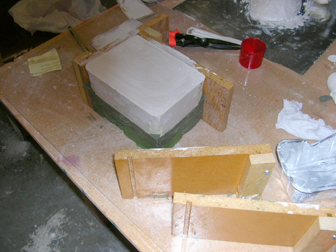 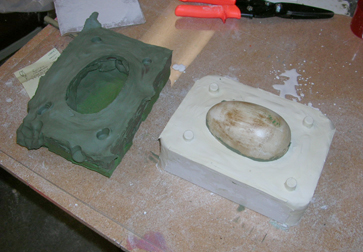 Now to the semi-failed mold. I stopped taking pics once I realized this was a no-go. Now I wished I had kept taking them. The failures are interesting.

************************
Sooooo…yeah. I went ahead and poured the second half since I thought I’d have to try again. Then I lovingly took a hammer and chisel to the big upper section so I could recover the prototype. The prototype had been rubbed down many times with oil soap so it created just enough of an oil layer that I could successful chip it out with minimal damage. I like the mold shape of the lower half and can think of a way to use it. So that’s why it’s a semi-failure. In any case, I’ve since figured out a better to mold it. I would be doing it right now, if it weren’t for the crazy weather keeping me home.

Whew. Congrats if you made it through all that.